How the 2020 Census will invite everyone to respond

Census preparations have already begun, and census canvassers are in neighborhoods performing preliminary work in advance of the census.  Please be aware that there are false social media postings alleging people are posing as census workers in order to rob homes.  Census workers can easily be identified. Census Takers in Your Neighborhood

The census is much more than just a head count. It provides a picture of our nation that helps determine where to build new schools, hospitals, and businesses; how federal funding is distributed; and how congressional seats are apportioned. It also helps us see how our communities have changed over time. That’s why an accurate count is so important.

UNDERSTANDING THE CENSUS
Once every decade, the federal government conducts a census of the entire population to count everyone in the United States and record basic information about them. Our nation’s founders believed this data was so important that they mandated the decennial census in the Constitution.

Easy and Convenient
In 2020, for the first time ever, the U.S. Census Bureau will accept responses online, but you can still respond by phone or mail if you prefer.

Confidential and Secure
Strict federal law protects your census responses. It is against the law for any Census Bureau employee to disclose or publish any census information that identifies an individual or business. Census Bureau employees take a lifelong pledge of confidentiality to handle data responsibly and keep respondents’ information private. The penalty for wrongful disclosure is a fine of up to $250,000 or imprisonment for up to 5 years, or both. No law enforcement agency (not the DHS, ICE, FBI, or CIA) can access or use your personal information at any time. Data collected can only be used for statistical purposes that help inform important decisions, including how much federal funding your community receives.

The Census Bureau will never ask for your Social Security number, bank or credit card account numbers, money or donations, or anything on behalf of a political party.

The Census Bureau has a robust cybersecurity program that incorporates industry best practices and federal security standards for encrypting data.

Census 101:What you need to know

The 2020 Census is closer than you think!

Here's a quick refresher of what it is and why it's essential that everyone is counted. 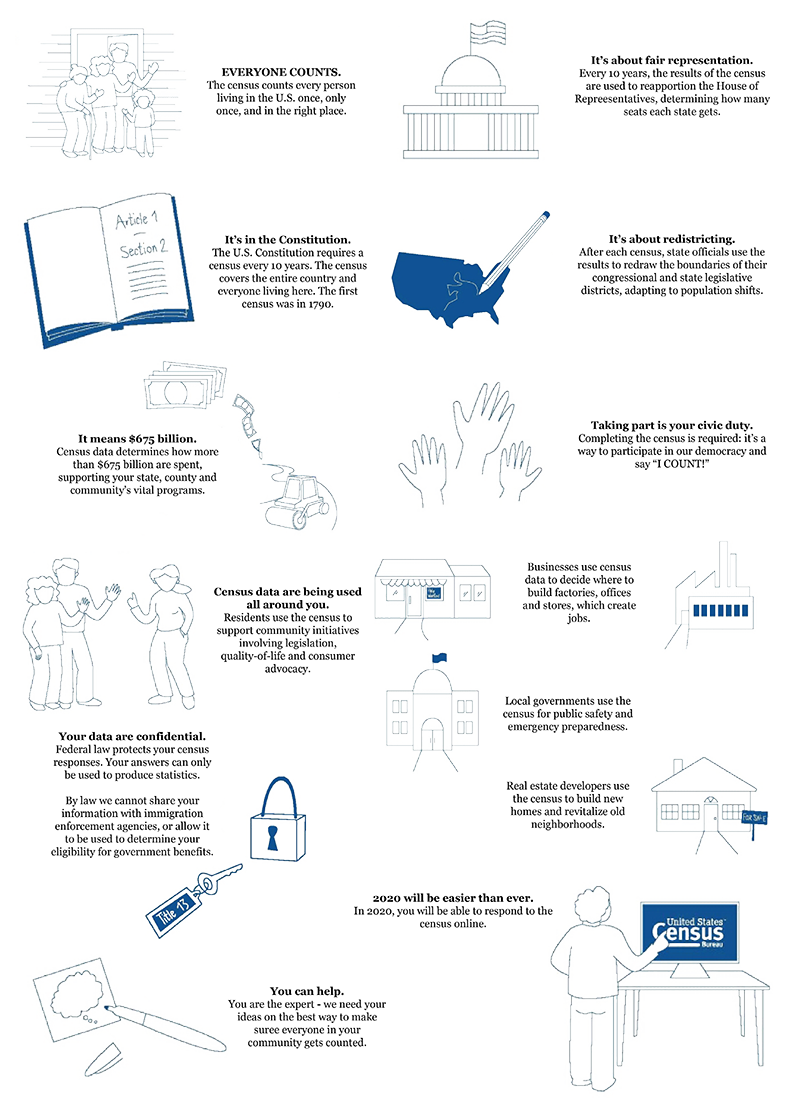 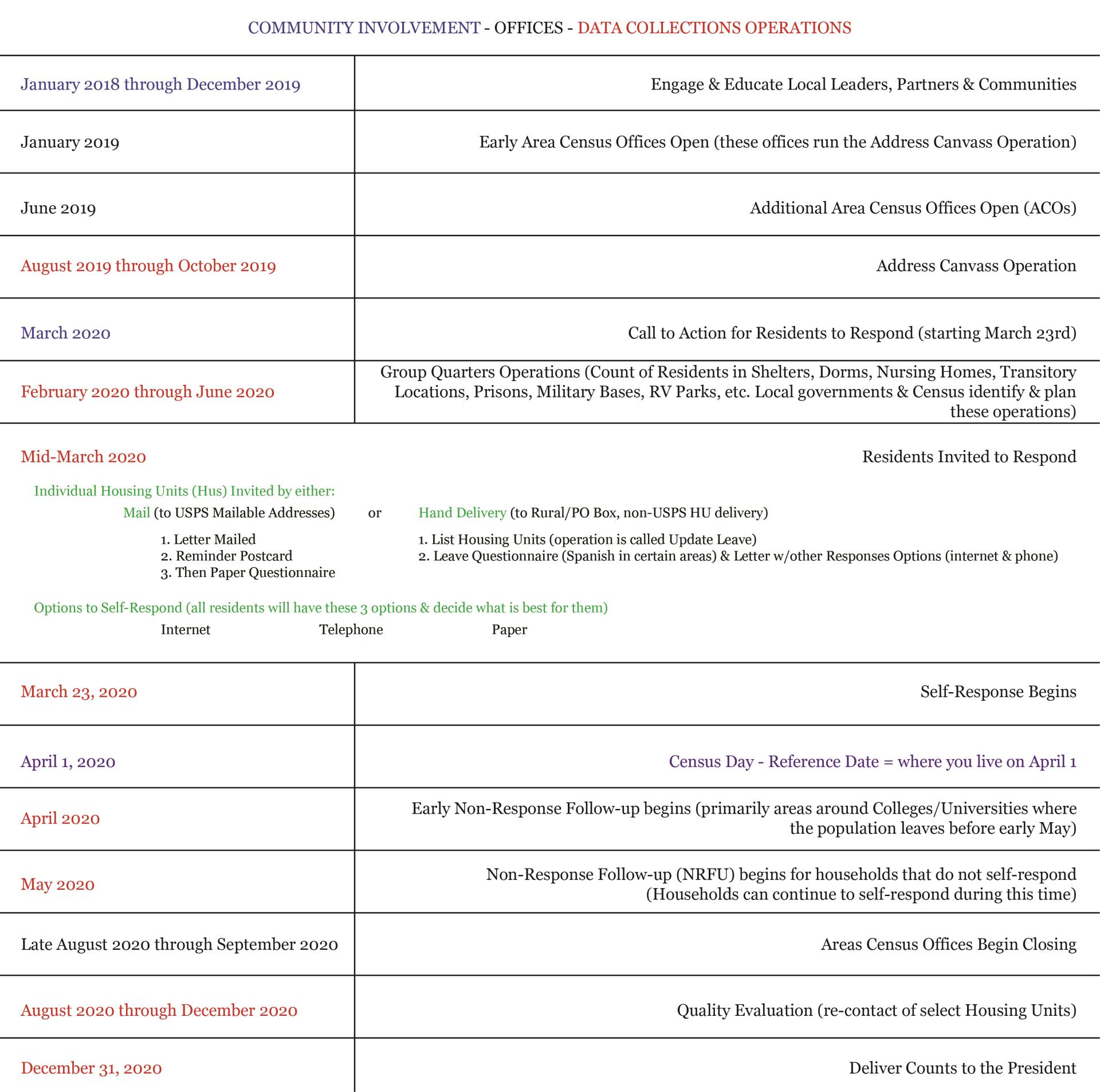 Census preparations have already begun, and census canvassers are in neighborhoods performing preliminary work in advance of the census.  Please be aware that there are false social media postings alleging people are posing as census workers in order to rob homes.  Census workers can easily be identified. Census Takers in Your Neighborhood

The law is clear - no personal information can be shared.

Under Title 13 of the U.S. Code, the Census Bureau cannot release any identifiable information about individuals, households, or businesses, even to law enforcement agencies.

The law states that the information collected may only be used for statistical purposes and no other purpose.

To support historical research, Title 44 of the U.S. Code allows the National Archives and Records Administration to release census records only after 72 years.

All Census Bureau staff take a lifetime oath to protect your personal information, and any violation comes with a penalty of up to $250,000 and/or up to 5 years in prison.

In 1982, the U.S. Supreme Court confirmed that even addresses are confidential and cannot be disclosed through legal discovery or the Freedom of Information Act (FOIA). In 2020, the U.S. Justice Department determined that the Patriot Act does not override the law that protects the confidentiality of individual census responses. No court of law can subpoena census responses. 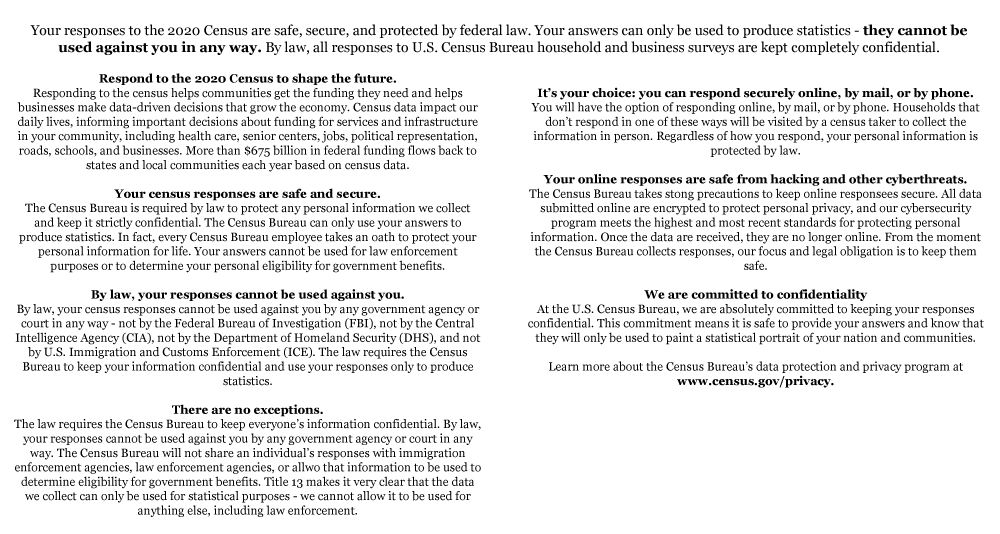